Although precise statistics are difficult to determine, animal advocacy organizations estimate that millions of animals are put to death in shelters across the United States each year. Because of their more prolific breeding cycle and other factors, the overwhelming majority of these animals are cats. Feral cats, homeless and largely unadoptable, are routinely euthanized, as are newborn kittens and pregnant cats that demand more care than many overcrowded, underfunded shelters can provide.

In the 1990’s the concept of feral colony management began to spread, along with the practice of trapping, neutering or spaying and releasing (known as TNR) feral cats back into the colony. Long before that method even had a name, one woman, Helen Sanders, saw this problem of homeless, stray cats, and felt they deserved care, not death. Over the years she even encountered physical threats from people who wanted these stray cats shot, not fed, but she persevered. 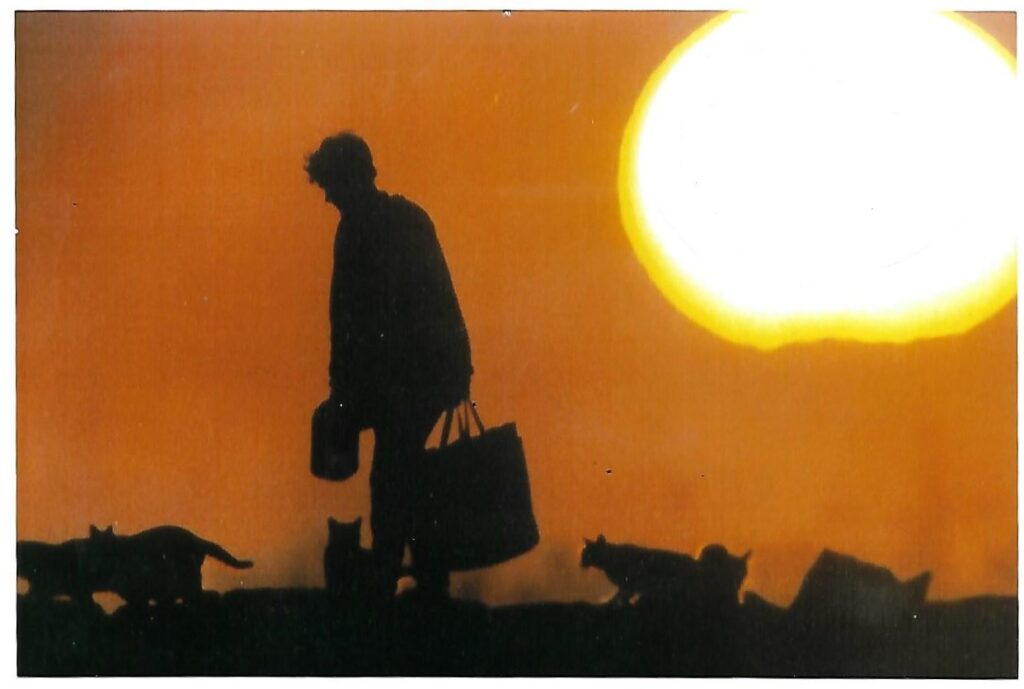 Born in 1935, Helen became a fixture in the small southern California beach town in which she lived out her life, pedaling her three-wheeled cycle, big basket in the backfilled with bags of cat food. She used specially designed traps to capture cats and have them spayed or neutered and vaccinated, they would release them back into the colony.

In addition to her work with feral cat colonies, Helen became known as the ‘go-to’ person for all things ‘cat’, spending hours counseling people in person or on the phone about problem behavior or illnesses. Even as she battled cancer, Helen continued her life’s work up until a couple of weeks before her death, riding her familiar trike through alleys, hauling bags of cat food past the beach and over rocks to her waiting “Jetty Cats”.

Lily and her kitten Paddy

just 18 days old, were at a high-kill shelter and soon to become another statistic but were rescued as time was running out. Lily had a respiratory infection as did tiny Paddy, for whom it was nearly fatal but with care and medication she pulled through. Both were adopted into loving homes.

Building on the Legacy

Shelters across the country are overwhelmed with abandoned and stray cats and unaltered cats perpetuate the tragedy of unwanted litters. Helen’s friends and supporters of her work resolved to help address this problem by creating an organization to continue her legacy of caring for cats and educating people by setting the following goals:
It is hoped that through the Helen Sanders Cat Protection and Welfare Society (HS CatPAWS) the staggering problem of pet overpopulation with its resultant tragic consequences can be eased and helpless cats whose only crime is to be unwanted can escape certain death and get another chance.
Donate